Fountains throughout the ages: how did they work? 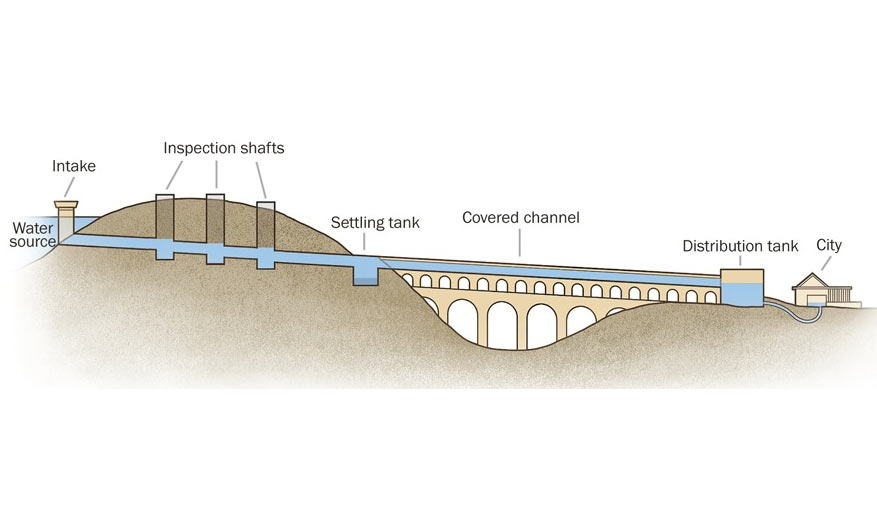 Ancient civilizations had been constructing grandiose fountains before electricity was discovered and utilized. In that case, you may wonder, “how did these fountains work?”

A memorable scene from Terry Gilliam’s ‘Life of Brian’ illustrates the impact the Romans had on science and human civilization. The film is set in Jesus’s time, and in this particular scene the Jewish liberation front gathers and considers ‘What have the Romans ever done for us?’ After an antagonizing back and forth between the stern rebel leader and one of his wide eyed followers, it becomes evident that the Romans invented some of the most powerful inventions, began social programs and created an overall thriving civilization. At least with hindsight that is.

One of the specific inventions this scene addresses is the aqueducts. The aqueducts relied on gravity alone to provide sufficient plumbing for the empire. Aqueducts worked by gathering water from sources at high altitudes which could then be funneled down in precise ways to provide for all the needed outlets. The Romans had the technology to really harness this water flow and use it where they needed it when they needed it.

How could fountains reach elevated heights? To make a fountain more than a well or man-made stream, it requires the spectacular water works that we imagine on a modern water feature. The gravity pressured aqueducts could produce high reaching water works, in the same way that a modern water tower works. The physics behind it is simple. The height at which the water is held compounds. For each foot of height the water is held at, the potential water pressure increases. That is how fountains in ancient Roman operated.

The Role of fountains in Rome

Rome needless to say was an expansive and thriving empire until the fall. Because of that, emperors would show their power and fortune by commissioning large scale public water fountains. Unlike today, average citizens would not have water fountains in their homes. However, everyone could come to the fountains to spectate and well as take the water. The water was publically owned and distributed from these gorgeous fountains.

The story of fountains is quite impressive. Fountains have been with humans for a very long time, certainly longer than electricity and modern devices. In that sense, when you get a water feature for your home, garden, office or commercial area, you are participating in this art tradition. Just as civilizations showed their prosperity through grandiose water fountains, you too have the luxury to adorn your space with this art piece as a sign of abundance and vitality.

Want to join the discussion?
Feel free to contribute!

What Can Floor Fountains Do for Your Living Space?

The Backstory to the Charming Manneken Pis Fountain
Scroll to top