The Backstory to the Charming Manneken Pis Fountain 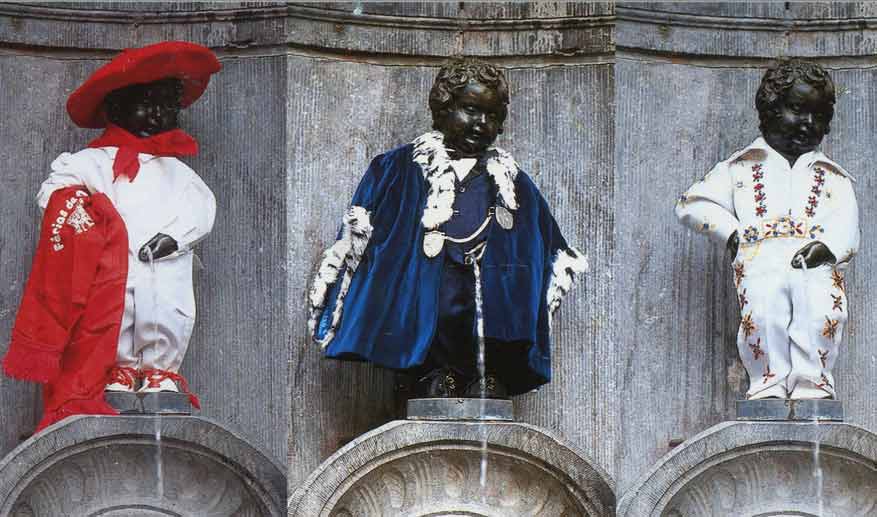 You might recognize the humorous fountain of a boy peeing. It is not merely a kitchy concoction by contemporary water feature designers. The famous fountain of the boy peeing is called the Manneken Pis which means “Little Man Pee” in Dutch. The bronze sculpture is located in Brussels, Belgium and was crafted in 1619. The current statue is situated near Brussels Town Hall and Grand Place.

There are multiple back-stories to the origin of this piece. One of the typical stories is that a wealthy merchant was visiting Brussels with his son. He had lost his son at the market and when the authorities found him he was peeing in public. The merchant then commissioned this piece to honor the city who took care of his mischievous son.

Another version is also silly but slightly heroic. This version states that the two-year-old Belgian Duke Godfrey III of Leuven, was only two years old when an invading army came to attack. The army put the young lord in a basket in a tree as the battle took place. He began to pee on the enemy, who ultimately did lose the battle.

Other back-stories exist, but they are mostly variations of these two themes.

The statue that exists today is a tourist attraction and is a living tradition for Brussels. The statue has been stolen multiple times throughout the years, with the most recent installation lasting from 1965.

Our favorite part of the Manneken Pis tradition is how people have dressed him over the years. He has worn almost 1,000 different suits. By visiting the official Manneken Pis website you can view the schedule of the statue’s ever changing costumes. Many of the previous costumes are now featured in the City Museum in the Grand Place. The costumes adorable, Manneken Pis has worn judo attire, vintage attire and dressed up as every profession you could think of.

This fountain is a pop culture icon that continues to charm guests. Manufacturers have jumped on the band wagon and even build replicas for mass consumption. Also, there are plenty of public replicas of the Manneken Pis, to honor the humorous Belgian tradition.

Leave a comment letting us know if you think Manneken Pis is a funny art piece or if it is a crude hunk of junk. Would you like to see the Manneken Pis? What would be a great costume for him to wear?

The Benefits of a Beautiful Lake Fountain

Cleaning your Pond and Fountain

The Benefits of Planters Over In-Ground Gardens

Enhance the Class and Elegance of your Outdoor Space

Making the Most of a Dry Environment

Want to join the discussion?
Feel free to contribute!

Fountains throughout the ages: how did they work?